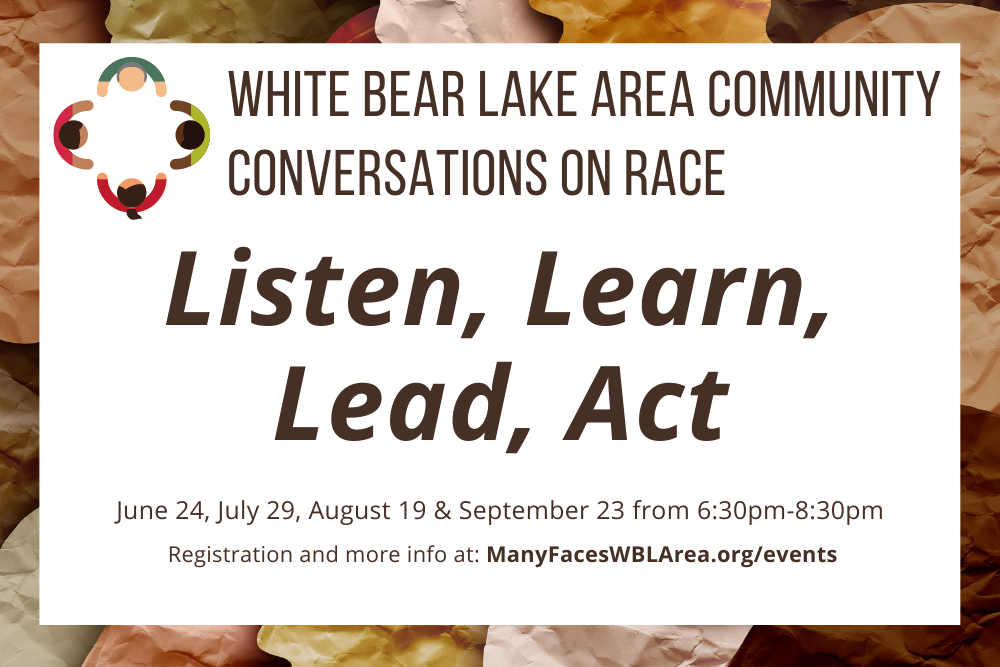 Our community conversation series was recently featured in the White Bear Press!

It’s not about tearing down a community for its failures—it’s about building a better one, in the words of one White Bear Lake resident.

More than 50 people sat in a circle in the Armory last week, listening as White Bear Lake residents shared some of their most painful personal brushes with racism in the community. Speakers expressed their frustrations and fears, including being subtly excluded at gatherings, dreading school and fearing for the lives of their children playing in the park.

Listening to and learning from these personal stories was the object of the first in a series of four community conversations on race, hosted by Many Faces in partnership with the Minnesota Humanities Center. Many Faces is a collaboration of White Bear Lake-area organizations that aim to build a welcoming and equitable community for all residents. Partners within the group include the city of White Bear Lake, White Bear Lake Area Schools and the White Bear Center for the Arts, among others.

Minnesota has a long history of racial inequity, but it’s been especially fraught with racial violence in the last year, said Tim Maurer, director of community services and recreation for White Bear Lake Area Schools, and one of the event organizers. After the killing of George Floyd in May 2020, many people felt called to action and wanted to learn more about how to get involved in anti-racism.

“There are so many people out there who have so many questions and don’t know where to start,” Maurer said. “They don’t know if they’re asking the right questions. We want to be the organization that they can come to and feel like it’s a safe space to ask those questions, and what opportunities are out there for their personal growth and next steps.”

Many people of color have voiced their frustration with the short-lived support from the white majority. Recent polls have shown that support for social justice organizations such as Black Lives Matter have dropped among white people since last summer, highlighting the importance of continued education about racism. Attendees of the conversation agree to listen respectfully with an open mind, putting away their smartphones and respecting the privacy of those who choose to share their stories.

Event organizers explained that some community members might be reluctant to engage in conversations about race because many people were raised not to acknowledge it.

“My generation, when we were going through school, were taught with a colorblind curriculum,” said Tracy Shimek, housing and economic development coordinator for the city of White Bear Lake. “We were taught not to consider race and that we were all equal. While I think the intent of that education was good and came from a good place, it excused the fact that people have different lived experiences based on various aspects of their identity, and race is one of those aspects that greatly impacts the experiences that people have.”

The event organizers hope the series will give people an outlet to discuss their experiences and questions about race, and create a more connected and supportive community for people of all skin colors.

The city of White Bear Lake recently launched a Welcoming and Inclusive Community Task Force, whose members will attend the community conversations and who will also listen to feedback about racial equity in small group and one-on-one settings.

Chris Streiff Oji, a member of the task force, was in attendance at the June 24 meeting.

Those interested in sharing their experiences and feedback with the task force are now able to sign up for small group and one-on-one conversations and fill out a community survey at whitebearlake.org under the “Community Engagement” tab.

The next community conversation, titled “Learn & Lead,” is scheduled for July 29 at Vadnais Heights Commons. Learn more about the conversation series or register to attend at manyfaceswblarea.org.